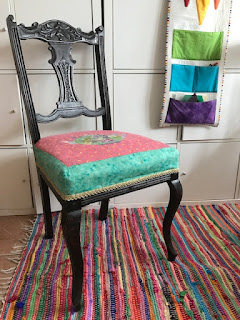 Do you remember the tapestry teapot chair I had so nearly finished but was looking for the right shade of pink rick rack? Well I gave up on the pink and found a gold braid. Perfect! Its amazing what you can buy online when you are unable to use the shops. 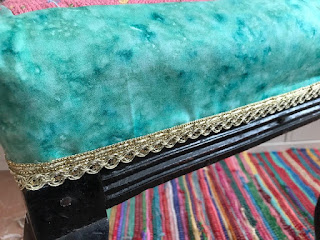 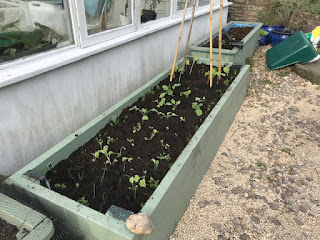 In the garden radishes, carrots, spring onions, beetroot, yellow beans, kale and lettuce have gone outside. 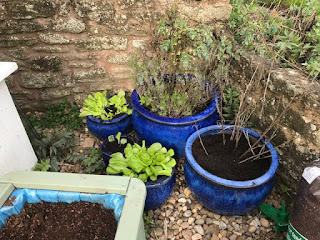 Inside courgettes, peppers and tomatoes. 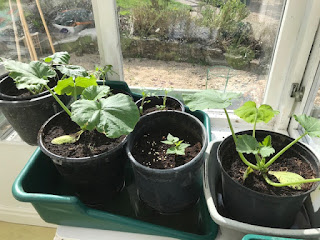 The Amazons Nancy and Peggy Blackett (from Swalllows and Amazons by Arthur Ransome) are wearing the red hats and the D's Dorothea and Dick Callum (from other Arthur Ransome books in the series) are all wearing new cardigans now. I'm so happy to see them cosy in this changeable weather. 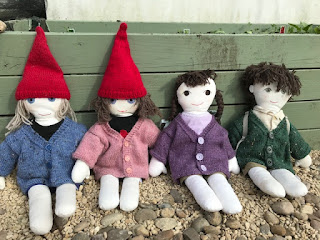 The weather is cooler and breezier today bringing some much needed rain overnight. Hopefully it will make it easier for people to stay inside. Most people are abiding by the rules. The word Corvidiots has been invented for those who are going to public places and not keeping 6ft apart, or trying to leave an area of high infection such as London to stay in an area of low infection, possibly bringing it with them, where small hospitals can't cope. Of course if you are a cabinet minister driving out of London to your second home in Herefordshire 150 miles away and another hour to visit your parents in Shropshire it is perfectly fine. Rules for normal people don't apply. Politicians can't possibly catch corona. Oh wait, our Prime Minister Boris Johnson is only just out of hospital ICU. It feels like we are "lions led by donkeys" yet again. We had plenty of warning that the virus was heading our way yet no airports vetted people coming in from infected areas. Hospitals are short of PPE for staff. 10,612 people in the UK have died so far. The UK is about 2 weeks behind Europe. I hope they have some good ideas about how a gradual lifting of lockdown can occur. A vaccine would also be fantastic. It feels like things wont return to normal for quite some time.

It's really helped these last 2 weeks to have a simple good cause knitting project. It's been so stressful worrying about the children. The good news is that Son's girlfriend returned home yesterday. (Thank you St Jude!) It was the last reasonably priced flight out for quite some time. She kept us all dangling until she had made a gap in having a melt down before finally booking it. At risk husband drove 3 hours each way with the top down in the middle of the night. Not one word of thanks. It turned out that her parents had spoken to her about a repatriation flight but she had said she had no way of getting there! She hadn't said a word to us. Goodness knows what she is telling her parents but I am glad that she is safe with her family in a country with far less deaths than the UK, and not putting my children at risk. 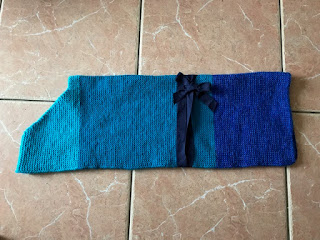 For those who are interested in a garter stitch (knit only) dog coat. The pattern said aran weight yarn but I used 2 strands of DK. (Make do and mend!)

Cast on 100 stitches with 4mm needles and knit for 24"
Neck divide: Right side facing knit 43 stitches, cast off 14 stitches, knit remaining 43 stitches.
On first set of 43 stitches knit 2 together on alternate rows until 20 stitches remain. Cast off.
Do the same with the other side. Sew the 20 stitch ends together.
Belly band 1.5" by 66" in garter stitch or 66" of ribbon.
Sew to the centre of the back.

Please remember your local animal shelters at this time. It is almost impossible to rehome in lockdown and they still need feeding and vet care. Some shelters are on their knees, and volunteers are understandably low. 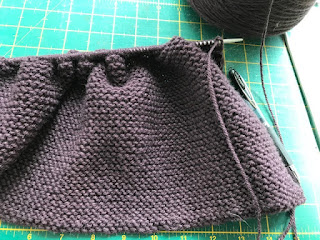 I started another one in a lilacish brown. Just the simple rhythm of knitting is so soothing. Edward Lear my last rat joined his brother on the 6th April. He was an old man and the vet was so humane bending the lockdown so he could do the kindest thing for him. I've really needed a non taxing project. 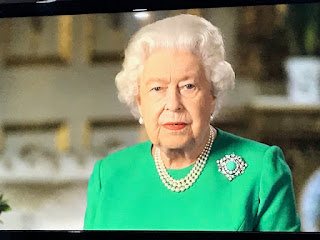 Another source of calm has been The Queen. She made a broadcast before Easter encouraging us to be as strong as previous generations. "We'll meet again" with Vera Lynn has a new significance this year. It's so awful not being able to hug my Daughter, but we message and skype. She has been able to sit in our garden to get some respite from Son's girlfriend. 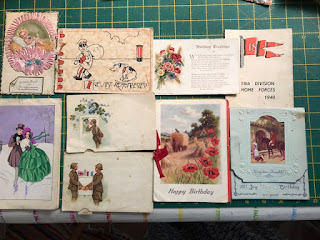 Back in 1939 Granny was 9 and the eldest of 3 children. Her father  had enlisted. The above cards were birthday and Christmas ones from the war which she treasured. Her father asked her to be strong and help mummy. I found out this week that he was rescued from Dunkirk and was then sent to Singapore but it had fallen before he arrived by boat, so he was made a prisoner of war. I knew he was held in Burma building a railway where he died and has a grave. 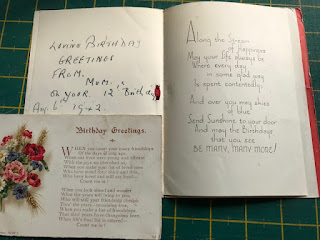 Such beautiful heartfelt words from Granny's mother are ageless. Click to read. She was 12 for the big one and 14 for the smaller one. Paper was rationed so the latter is just a postcard. 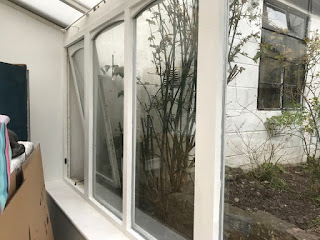 There have been a few changes in the cottage. I used up all my primer and undercoat on some of the conservatory window frames now they have had their weeping knots treated. It's been swooning hot in there the last few days, so no other painting. 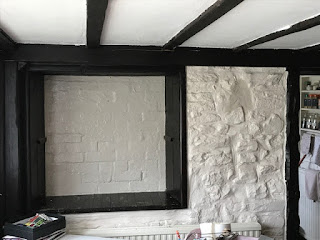 In the craft room the bricked up window is now beige instead of the blue we inherited. It tones a lot better with the stonework. With Edward's cage gone, I hated seeing the blank space where it was, so had a big furniture shuffle around. Unfortunately my shoulder came out again. It was due to be operated on, on the 7th April, but everything has been cancelled other than corona in hospitals. Finding the special box of things my aunt gave me of Granny's in the shuffle, couldn't have been better timed. 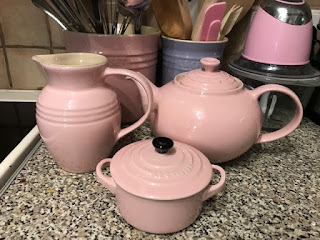 We've had 3 weeks of lockdown so I'm a bit frustrated, unable to do things at normal speed, but I am lucky. So many normal folk are in furlough and needing to use food banks. Some are trapped with abusing partners, bored children, empty pantries, chronic medical conditions, in tiny flats, in cities with no near parks to walk in and experience some of the healing balm of nature. Sitting down with a cup of tea gives a sense of normality and quiet. I can see why it was said that we got through the war thanks to it. lol

Unlike in the war, I'm not bound to the radio. The National Theatre is releasing a filmed play each week on you tube.  Andrew LLoyd Webber has a you tube channel with a new musical on each Friday. On Netflix I'm enjoying the music on American Idol and the costumes on Ru Paul's Drag Race. I'm taking joy in the little things. What is giving you some joy in this crisis?

But my heart just exploded seeing those treasured letters written during the war. What a remarkable story you shared -- Dunkirk, Singapore, POW. How terribly sad. But those letters are so wonderful. You are fortunate indeed to have them.
14 April 2020 at 13:47

Ulla said…
Your garden photos show so many signs of new life and growth while we are having snow showers, yes, more than during the actual Winter months. The chair is perfect now. Happy to see the Amazons and the D's so pleased with their new outfits. Your gran's postcards are a true treasure.
14 April 2020 at 15:12

Tracy said…
It is always a joy to come here and catch up, Melanie! Always wonderful to see what you've been doing at home, what you've been making... I don't know how you do it all! Glad Son's girlfriend is safely home. It must be very strange travelling during these times. The Queen's address was so heartening--it took courage, I'm sure to face the nation with all that's going on--she has seen it all! How sweet all those cards and greetings of your Granny's!! It's amazing to think about paper being rationed, and so much more besides! LOVE your PINK kitchen things! :) We are in week 5 of lockdown here, and numbers are evening out, which is very encouraging. From the new two weeks a slow "reopening" of things will begin to happen. Some schools will be back in session and hopefully be able to stay open before summer holidays. Dentists and other services can begin again... It will be interesting to see how it goes. All is subject to change, depending on how things go, how the numbers go... For joy we have lots at home, so we don't feel we are missing much. Always things to watch via YouTube or other (lots of good travel documentaries there--armchair travel!), we have books a-plenty, I always have yarn... we'll be good for a long while yet, if need be. ;) Hope you & your family continue to keep well, stay safe! ((LOVE & HUGS))
15 April 2020 at 09:02

Popular posts from this blog

Sindy is Every Girl's Dream in a Time of Corona 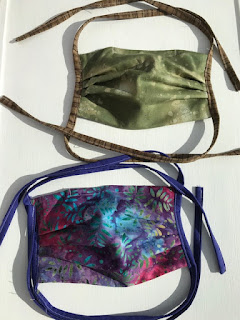 I think the UK Government is going to ask the public to wear a mask in public places next. There is a significant increase in traffic noise, so I think a lot of people aren't keeping to Lockdown any more. There are a lot of mixed messages in the press because our government can't agree what kind of easing should occur and when. If they dither too much I can see people making the best economic decision for their families, which may not be the best ones for their health.
These came from the Institute of Good Housekeeping's pattern here.
My Lockdown hobby of re-collecting Sindy things also means I am making things for them.

A second coat for Greyhounds In Need has been finished. Link to the pattern in previous blog post.

The plastic ladder thing came in a job lot of Sindy and Barbie stuff. I don't know what it is really for but it resembled a bedstead. First I reinforced the ends then I hand quilted a bit of old pillowcase to make a mattress.
I picked out a 70s loo…
Read more

Stratford Upon Avon and watery makes 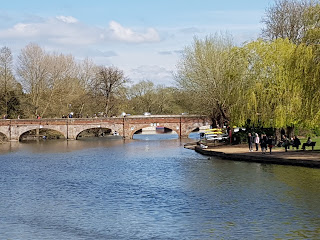 Welcome to Stratford Upon Avon.  We are here enjoying the April sunshine by the River Avon.  South of the current town centre is the church where Shakespeare is buried.  The Royal Shakespeare Theatre is the place where his work is kept very much alive.  The back of the theatre.  Stratford Church. Sadly closed for a couple of weddings so no tomb pics.   Beautiful apple blossom.
After the shock of my step father's death, a little earlier than the oncologist thought, I had a craving to make something blue.  This little mini quilt is what happened.   I loved paper piecing the pond itself then appliqueing the leaves flowers and wings.   I had some stash beads which were just right for the dragonfly bodies.  Sirdar Colourwheel shade 204 was great for this slouch hat.The turquoise shades have yet to be used. I think someone got the yarn weight wrong for this pattern as it only took half the stated amount.  I wore this hat with a grey polo neck and my tweed jacket for the Stratford trip…
Read more

Rowan Tree Cottage
This is a place where I hope to share things I make, places I see, and the walks around me.